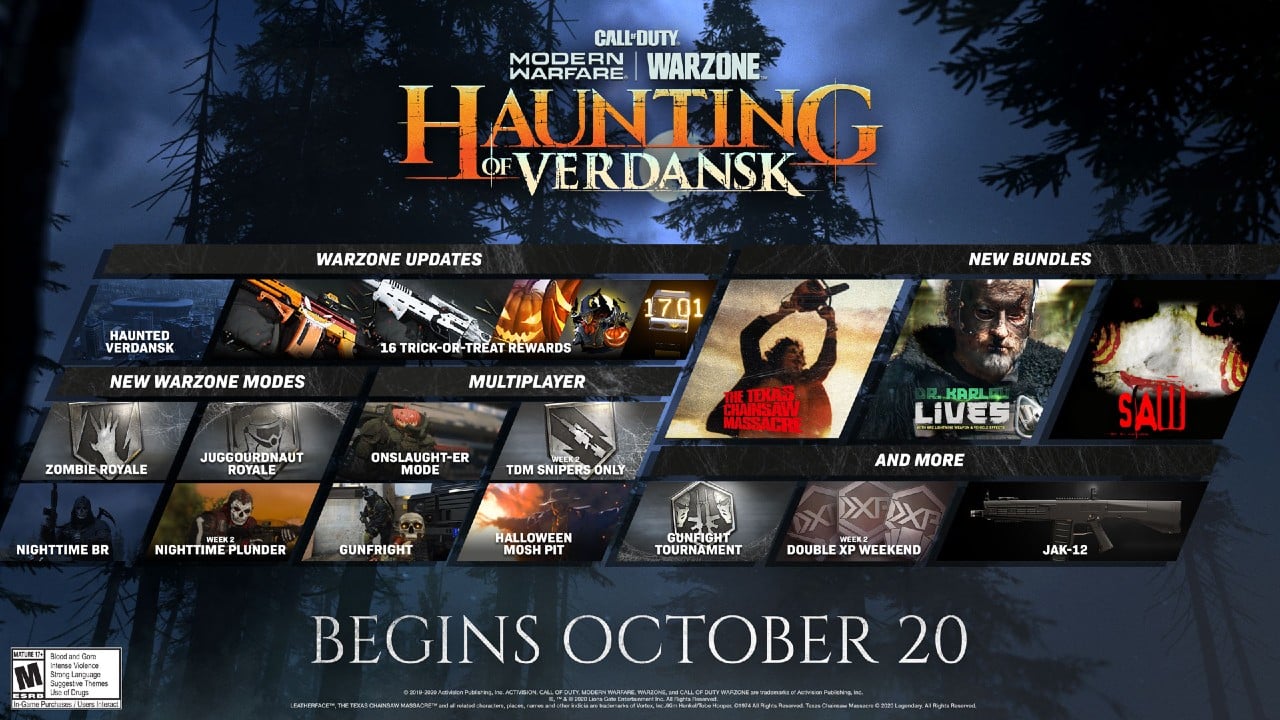 Modern Warfare’s first-ever Halloween event, The Haunting Of Verdansk, has just gone live! In this limited-time event, we’ll see a ton of new content from game modes to character skins. Let’s take a look at what you should expect from Call of Duty: Warzone and Modern Warfare during The Haunting Of Verdansk (via an official blog post from Activision).

When Does The Haunting Of Verdansk Go Live?

The Haunting Of Verdansk update will go live for Call of Duty: Warzone and Modern Warfare on October 20th at 1:00 PM ET. So, you should be able to download the update now. The event will run from October 20th to November 3rd.

There was some truth to the rampant speculation online over the past month or so. Zombies are coming to Call of Duty: Warzone!

Zombie Royale, a new nighttime Warzone playlist, allows operators to return to life by becoming one of the undead. If you become a zombie, don’t fret. You can still be brought back to the land of the living. All you have to do is collect 2 syringes and you can drop back into Verdansk with your custom loadout. To get syringes, it’s said that they will be dropped when a player is killed.

The last team with a living operator will be the victor.

According to the Activision blog post, zombie players will have the following abilities:

Tomorrow at 1 PM EST we will be able to play #Warzone at night, as zombies, against Leatherface and Billy from SAW.

When you grow a little tired of mowing down the undead, you may want to try out Warzone… at night.

Like Zombie Royale, a nighttime playlist that has been rumored to appear in Warzone for a while. Now, players will be able to drop into Verdansk and attempt to use their new surroundings to get the drop on competitors.

Modern Warfare is also getting a ton of new content with the Haunting Of Verdansk update today.

A Snipers Only playlist is getting added to multiplayer. In this Team Deathmatch mode, you won’t be able to use custom loadouts. Instead, Infinity Ward have have 5 default sniper loadouts for you to pick from.

Additionally, we have a brand-new mode coming out today called Onslaughter. You can see how Activision describes the mode down below:

“Squads must wrest control of a Juggernaut suit that spawns somewhere on the map and advance forward into a specific goal area. Be prepared for plenty of Minigun fire and consider powerful Killstreaks to take down an opposing Juggernaut, as well as the mad scramble whenever the suit is available for the taking. Also, the Juggernaut in this mode – and in all other modes during The Haunting of Verdansk – will come with a pumpkin head, which is surprisingly sturdy and durable despite it being a hollowed-out squash.”

That’s not all. If you go on a 3-killstreak in any game mode, your operator’s head will turn into a flaming jack-o-lantern. Along with this, you can expect other cosmetic changes to other game modes like Kill Confirmed and Domination.

Billy The Puppet, Leatherface, And Other Horror-Themed Operator Skins

The Haunting Of Verdansk will bring various spooky skins to the first-person shooter. First up, we have Billy the Puppet skin. Here’s what you can expect in the SAW bundle: 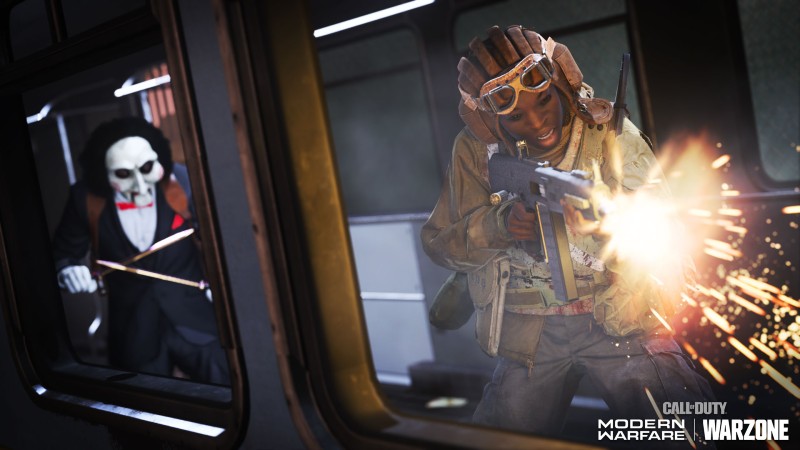 Then, we have the man who gives new meaning to skincare, Leatherface. Here’s what you’ll get in the Texas Chainsaw Massacre bundle:

Operators like Ghost and Mace are getting new skins in this update but, there is one last featured bundle to talk about. There’s a fabled myth in Verdansk about the insane Dr. Karlov. Here’s an official description of the mad scientist and what you can expect in the bundle:

“Driven to a point of no return after countless failures in his laboratory deep inside the Gulag, Dr. Karlov became obsessed with electricity and energy-charged weaponry, testing it often in ‘experiments’ on those who dared to wander near his hideout.”

The Haunting Of Verdansk Trick Or Treat Event

And that’s everything we know going into The Haunting Of Verdansk update so far. Now that the event is out, we’re sure to uncover a few secrets and potential easter eggs in the darkness of Verdansk. If that happens, we’ll be sure to cover it here at ModernWarzone. For the latest Call of Duty news, be sure to follow ModernWarzone on Twitter!