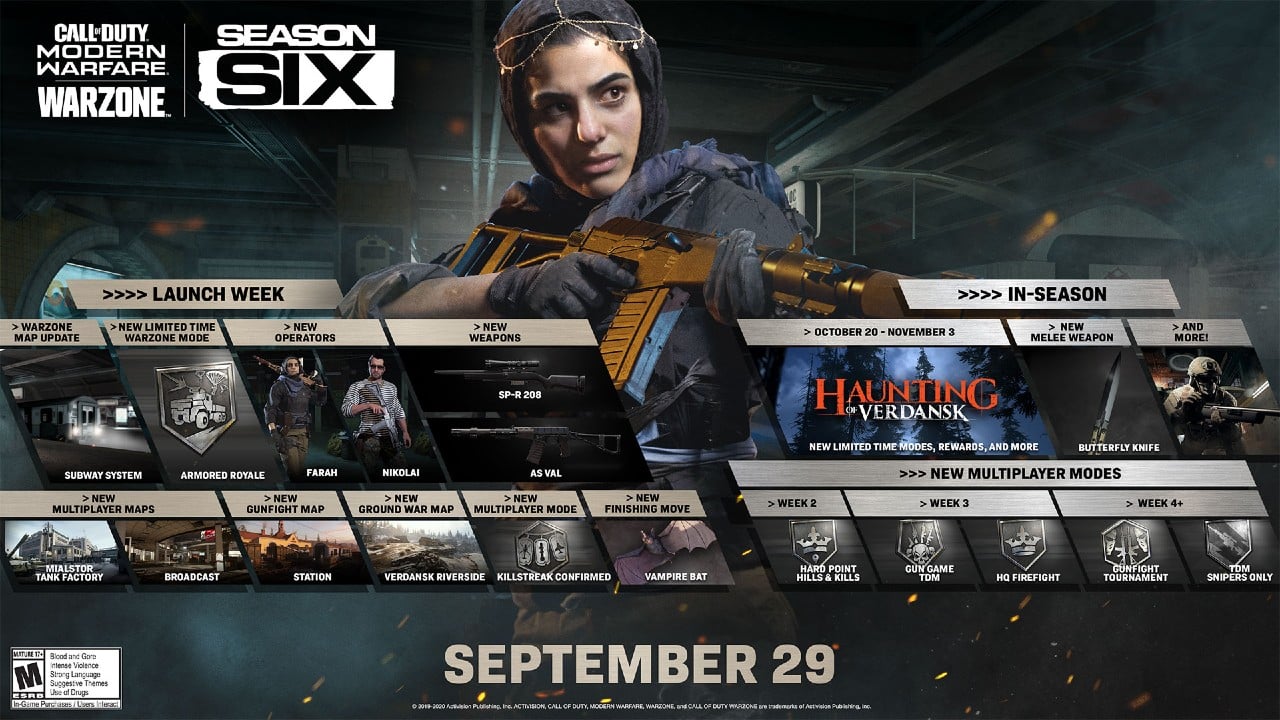 A new gameplay trailer has been released for Call of Duty Modern Warfare detailing everything coming to the game and its free-to-play battle royale in Season 6. You can check out that trailer down below:

Thanks to a recent blog post from Activision’s James Mattone, we have more information on what players can expect in Season 6. There’s a lot to unpack here so let’s just get into it.

Here are the launch times for Modern Warfare Season 6 (PS4 players can pre-load the update):

Additionally, those on consoles will have to download a compatibility pack to play multiplayer modes:

And we here at ModernWarzone are a lot like the late-great Billy Mays because that’s not all. Since Survival Mode is FINALLY heading to Xbox One and PC on October 1st, players will have to download another pack.

Activision did remind players that they could remove unused packs to make space for new content. If you think you’ll need to do that for Season 6, click here.

Like every new season, Modern Warfare Season 6 will bring new operators, skins, finishing moves, and weapons to the game. Here are some of the new operators and skins coming to Call of Duty Warzone Season 6 and when you will unlock them in the battle pass:

As we’ve talked about many times here at ModernWarzone, Modern Warfare Season 6 will introduce a new fast-travel system in Warzone via multiple metro stations located throughout the map. In each station, you’ll find loot, contracts, and most likely other players trying to get on board the train. The trains are also a conflict-free zone, meaning that they will not move if there is any fighting going on inside or directly near the train cars. You can read more about the metro system here. 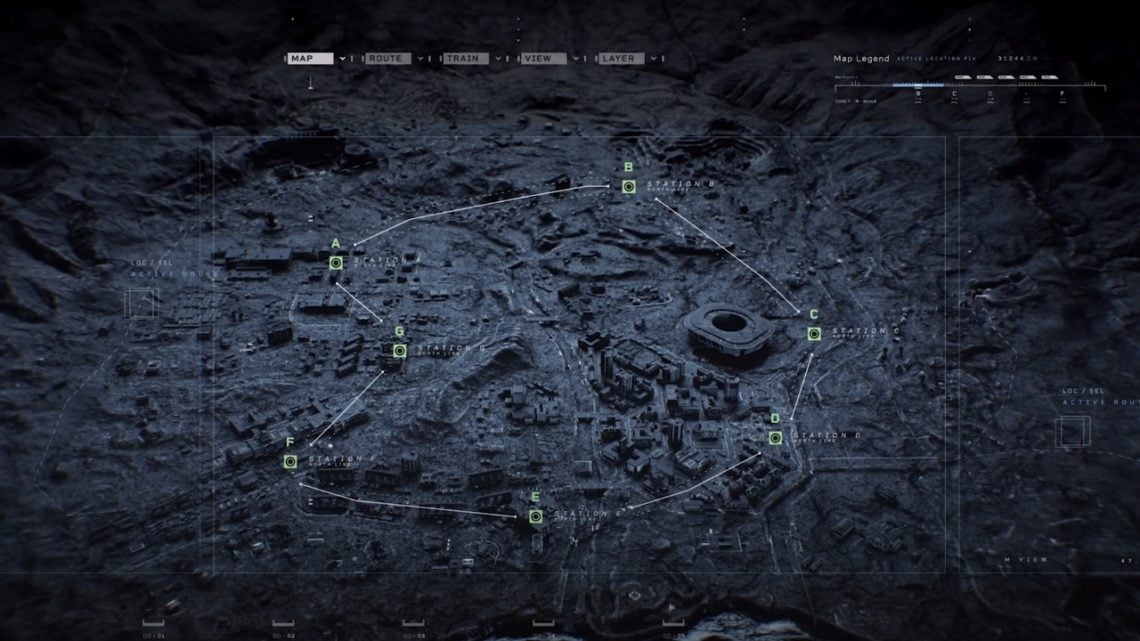 In the trailer, we saw glimpses of the long-rumored night mode version of Warzone. While there’s a chance this could be a standalone playlist, it could actually be apart of Modern Warfare’s horror-themed event coming in October. This limited-time event is called “Haunting of Verdansk” and it’ll run from October 20th to November 3rd. At the end of the trailer, we heard a disturbing laugh that sounded a lot like Jigsaw from the Saw franchise. So, that may be a thing to watch out for.

There has been a ton of speculation and other rumors online indicating that this will be a Zombie Royale playlist. As we previously reported, the Primis version of Nikolai Belinski from Treyarch’s Call of Duty zombies mode has been spotted in official images for the upcoming season. We’ll be sure to update you on both of these potential playlists and what’s included in them once Infinity Ward reveals more.

It looks like the zombies version of Nikolai is also coming to Warzone with season 6! #Warzone #Zombies #ModernWarfare pic.twitter.com/Pa6r1pqZ2s

Warzone isn’t the only game mode being updated with Season 6. The base version of Modern Warfare will have new maps for 6v6, 10v10, Gunfight, and Ground War game modes. Let’s take a look at the new maps coming to Modern Warfare’s multiplayer: 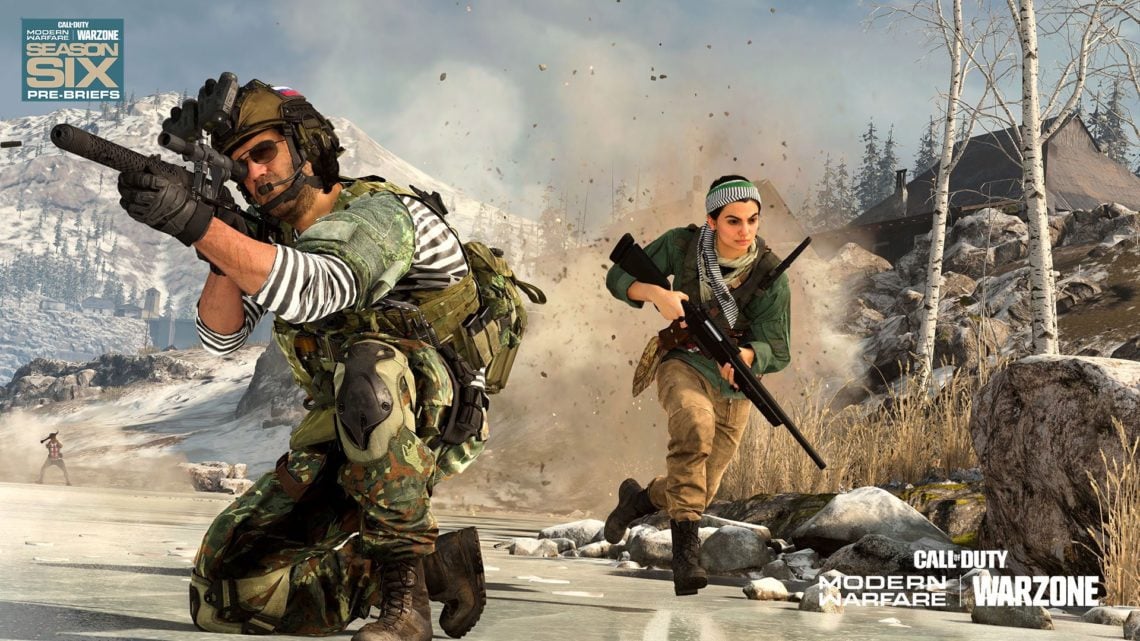 Modern Warfare Season 6 will also bring more playlists to the game. Here are the new modes and how Mattone describes them:

Even though that was a ton of content, we still didn’t cover everything in the Activision blog post. So if you wanted to see more, you should definitely check it out for yourself.

Be sure to check us out tonight over on Twitch as Modern Warfare Season 6 goes live. Also, be sure to follow ModernWarzone on Twitter for the latest Call of Duty news!