Review: Halo Infinite Campaign is a Return to Glory and Fans are Going to LOVE It 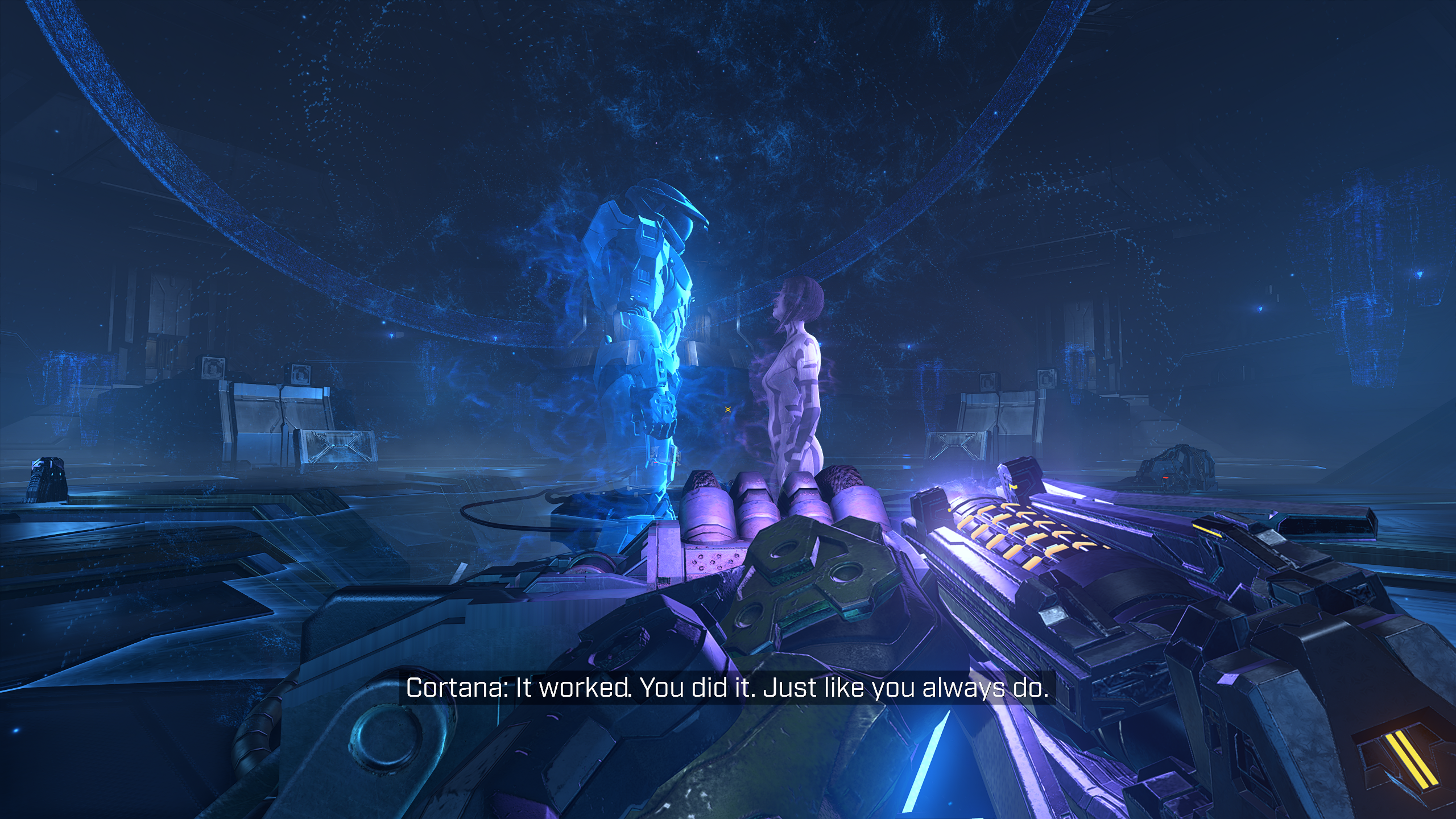 Halo Infinite’s Campaign is a Game of the Year Contender

It’s been 6 years since Halo fans such as myself have had a new game to dive into. Thanks to Microsoft and Xbox, ModernWarzone was given early access to the full campaign and everything it has to offer for fans who deem the $40 price tag appropriate. Spoiler alert, if you’re a fan of Halo it certainly is worth the price, and is one of the best Halo campaign experiences ever made.

The campaign plays like a love letter to fans, with the original Halo experience from Combat Evolved making a welcome return with what feels, to me at least, like a combination of the best parts of Halo CE and Halo 3. While neither of those two titles had “open world” environments like the sprawling world of Zeta Halo in Infinite, they still had several notable levels that gave the decision to the player in regards to where they wanted to go and what they wanted to tackle first.

Halo Infinite manages to not only give the player a sense of awe and wonder while exploring Zeta Halo and fighting The Banished, a new threat to Master Chief and the galaxy, but a sense of scale. With a massive open world and the majority of the experience taking place on a single shattered piece of Installation 007 that’s being repaired, it certainly makes you realize just how tiny John and his problems are. Infinite is one of the most immersive worlds and story’s Halo has ever had to offer, with each new discovery only quenching your curiosity and thirst for more for mere moments before moving on to the next. 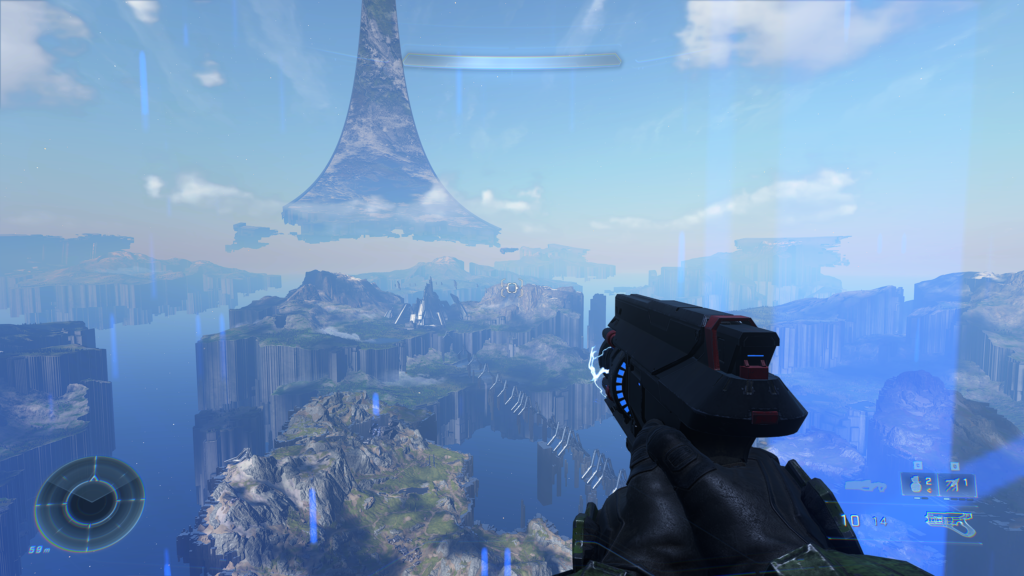 In the previous Halo games I mentioned that included open world exploration type elements, such as the 2nd mission on Halo CE or even The Silent Cartographer, the player simply was allowed to choose which objective they wanted to tackle and when. In Halo Infinite, those same choices are given to you throughout main story missions (Destroy 3 AA cannons), however there’s a brand new open world mechanic to explore as well. Parts of this open world include the following. 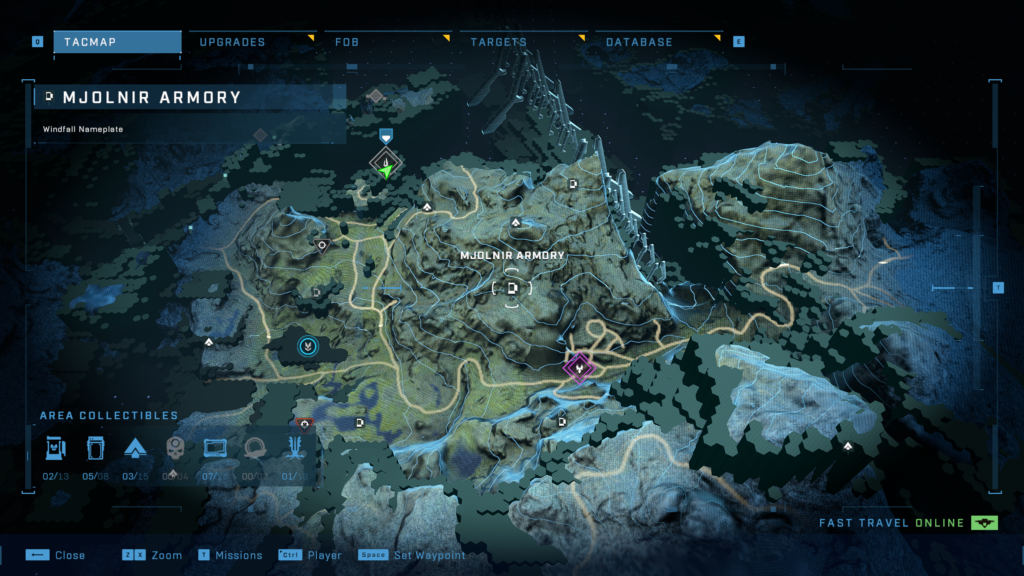 Overall I was VERY surprised by how much I enjoyed my time in the open world of Zeta Halo. I originally thought it would feel all to familiar to Far Cry outposts, however I found that this loop within the world of Halo is a welcome one. Each side mission and FOB can be approached in whichever way the player deems fit, adding a lot to the replay-ability of each encounter. I could also see players on spending the time to upgrade their Valor points in order to unlock the best weapons and vehicles to use in their story missions, as the game can be difficult at times even on heroic, much less Legendary.

My personal favorite part of the entire game was the ability to explore or do whatever the hell I wanted, when I wanted. Exploring Zeta Halo was a blast for me, and the enjoyment of it was largely due to the Master Chief’s new grapple hook, which made me feel like a Spartan II version of Spider-Man. I will admit that I saved most of my early access exploration for after grapple-jacking my first Banshee, as it made exploration so much easier and more efficient. This isn’t a knock on the game at all though, as missions in the open world are not far from each other.

To my own chagrin, I can confirm that the previous datamines of the campaign unlockables not including armor variants was in fact correct. The only way it wouldn’t be, as far as I can tell, is if achievements reward you with those armor variants or sets, but achievements were locked on the early access build I played. Among the multiplayer unlocks you can find in Halo Infinite are armor coatings, weapon coatings, visors, emblems, nameplates, charms and vehicle coatings.

As a life long Halo fan and someone who wasn’t necessarily a fan of armor upgrades on Halo Reach (looking at you armor lock) I was VERY pleasantly surprised with the amount of fun Chief’s upgrades provide in Infinite. In particular, the grappleshot was my favorite of the upgrades available to Chief. It alone made exploring every nook and cranny of massive Forerunner structures while searching for skulls that much more tantalizing. It also made reaching places you could only do in previous Halo’s by Super Bouncing a breeze, making for some of the most beautiful screenshots I’ve taken in a video game. 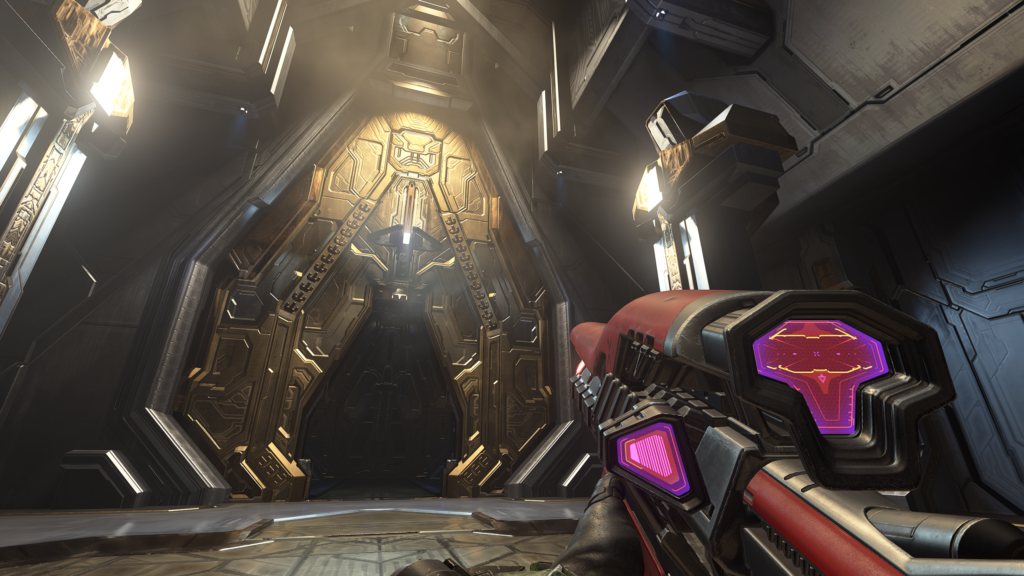 Overall Master Chief has access to 5 Upgrades in Halo Infinite, with 4 providing new equipment for the player to use as they please, and the 5th being a permanent increase to the Chief’s shields in intervals. The following upgrades will be unlocked throughout Halo Infinite at various points in the campaign.

Each of these abilities can be upgraded 4 times for spartan cores, with each progressive upgrade costing more cores. While the upgrades aren’t game breaking, I certainly enjoyed fully maxing my grappleshot which gave it a stun effect that helped a lot when fighting some of the more deadly enemies, such as the Spartan Killers in the campaign. 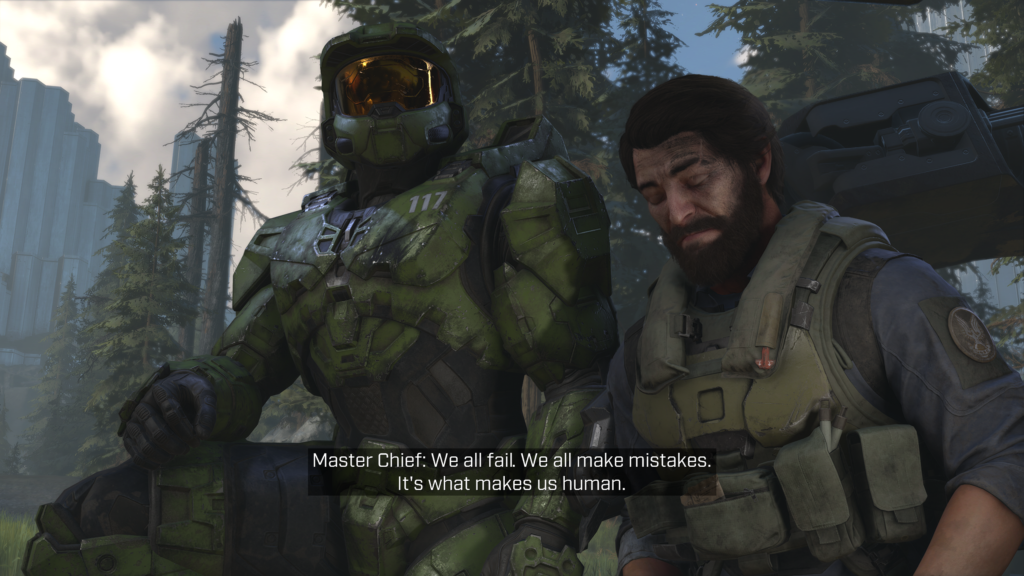 One of the most important parts of a Halo campaign are it’s characters, and Halo Infinite is no exception. Infinite has a few new characters as well as some familiar faces. Throughout the campaign Chief will also be reminded of some of his fallen comrades, such as Captain Keyes from Halo CE. To make things simple, let’s make a list of the main characters you will be seeing throughout your time on Zeta Halo, spoiler free of course.

While I would love to delve into each of the characters in depth, and I could freely do so, I’d rather you experience them for yourselves. I will provide a brief snippet for some. 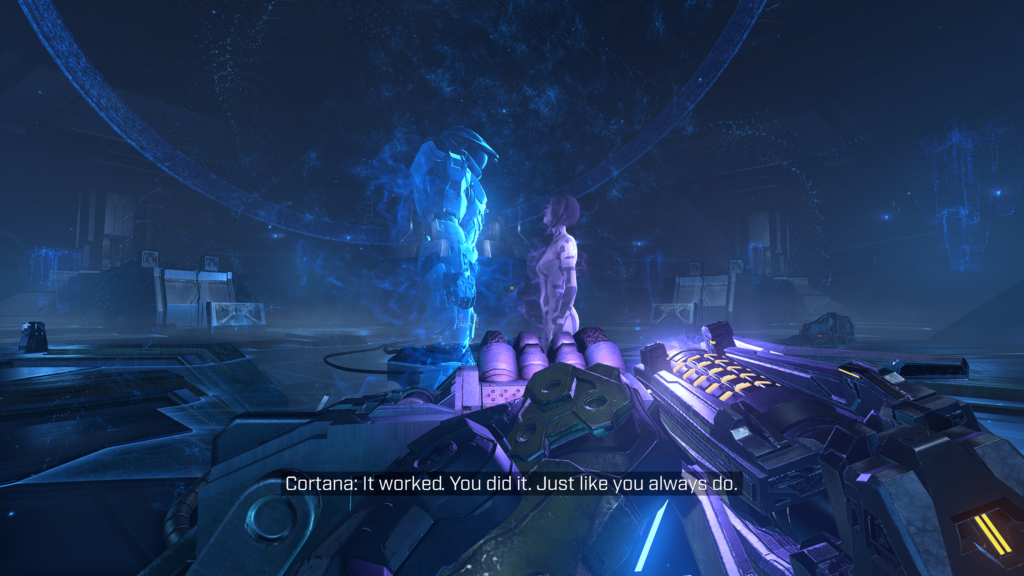 Sadly, there is no Arbiter or Flood in the game as it stands, while DLC will most likely have them. The Flood are mentioned as being less of a threat than “The Endless” but are never seen in the story unless I fully missed something. Fans will want to pay close attention to the post credits though, I’ll let you all experience that for yourself.

Another thing worth mentioning is this game contains several boss fights that are actually very well done. They all present a challenge to the player and a few even have their own unique mechanics that add another layer to the fight. Each boss fight, at least to me, was memorable and, to my surprise, I found myself struggling with a few of them. One in particular took me 8 tries before finally defeating them.

Overall every character in Halo Infinite has a well thought out backstory and enough depth to make the player interested in them throughout the game. Interactions between main characters come often, and it’s a welcome sight to see. One of the most prolific feelings I had throughout Infinite was nostalgia. 343 really made sure to make this game a story that old fans would love, and while I worry that could leave some new fans of the series confused with the story, it’s honestly a welcome change after whatever the hell Halo 5’s story was.

Halo Infinite’s gameplay is thoroughly fun, immersive, and enjoyable throughout the entire length of it’s campaign. From doing open world missions for Valor, to tackling large spanning Forerunner structure’s in what reminded me of Strike’s in Destiny, Infinite’s gunplay, movement, flexibility and Chief’s ability to adapt and conquer any situation with his new MJOLNIR armor abilities is fantastic.

While I spent most of the campaign using my grappleshot to grab fusion coil explosives to yeet at my enemies, I also took the time to try all of the others. The great thing is that you can easily change between them on the fly with the system in Halo Infinite, which allows Chief to use any of the abilities as he pleases in combat. You can grapple shot to a high ground, quickly switch to your drop shield and give yourself cover where there usually wouldn’t be any.

Overall Halo Infinite’s gameplay mixed with the open sandbox world that 343 have managed to give players is quite simply fun. No two encounters will play the same, and with the freedom of choice I’m sure you’ll see Spartans performing crazy clips throughout the supposed 10 year life cycle of Halo Infinite on it’s campaign and open world.

How Long Is The Campaign?

There is an achievement for completing the campaign in 8 hours, which I can say I wouldn’t have earned even if it was available with the early access build. I spent, in total, nearly 11 hours in game time playing Halo Infinite before I finished the fight. While I admittedly did not spend nearly as much time on the open world missions as I would’ve liked to, I can say that I put at least 8 and a half hours of my campaign time in on story missions, meaning this Halo lines up with other releases even without the open world content.

If I had to estimate, I’d say there’s about 14-16 hours worth of content in the game for those who move through games quickly, while those who are slower could see that time exceed the 20 hour mark before 100% completion on normal, probably 30 hours on legendary. Not once throughout my 10+ hours with Halo Infinite did I ever get bored or tired of playing. In fact, I could never get enough. Sadly there just aren’t enough hours in a day. 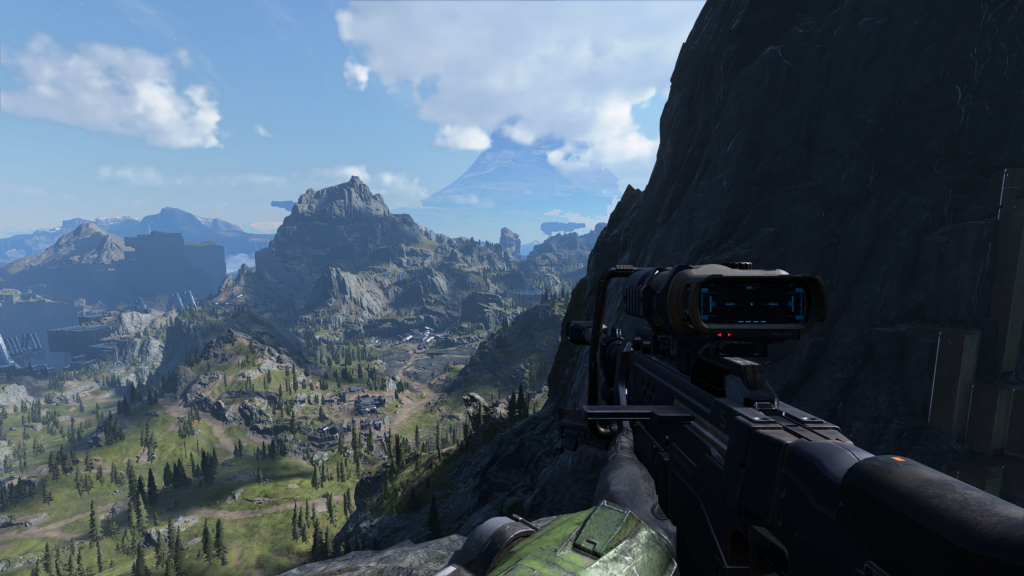 At the end of the day Halo Infinite was delayed and we still won’t have co-op single player at launch for the first time in Halo history. Despite all of that, I am incredibly happy to say that the experience is WELL WORTH the $40 price tag and will only continue to improve as 343 has said they plan to add Campaign DLC for Infinite in the future. The gameplay feels amazing. The open world is expansive and beautiful, and while I’m sure it will become redundant by the time people 100% complete the entire thing, it was thoroughly enjoyable for the time I put into it.

With everything previously mentioned in mind, I give Halo Infinite’s campaign a 9.5/10, with the only reason it not receiving a perfect 10/10 being that it may be hard for new fans to pick up on the story without external information and no co-op mode at launch.

If you are a true Halo stan, I can not recommend this campaign enough, and I believe it’s the best Halo Campaign since Halo 3, and some could even argue it’s better.

That’s going to conclude my first ever Video Game review! Thank you if you made it all the way through, and be sure to check out ModernWarzone on youtube for nearly an hour of early gameplay in beautiful 4k and 1440p!