New Call of Duty Black Ops Cold War: Everything You Need to Know

Treyarch kicked off their reveal event with the official Black Ops Cold War multiplayer trailer showcasing snippets of the game’s various maps, mechanics, vehicles, and visuals. You can check out the full trailer down below:

Via an Activision blog post, here’s how the Black Ops Cold War staff describes each map: 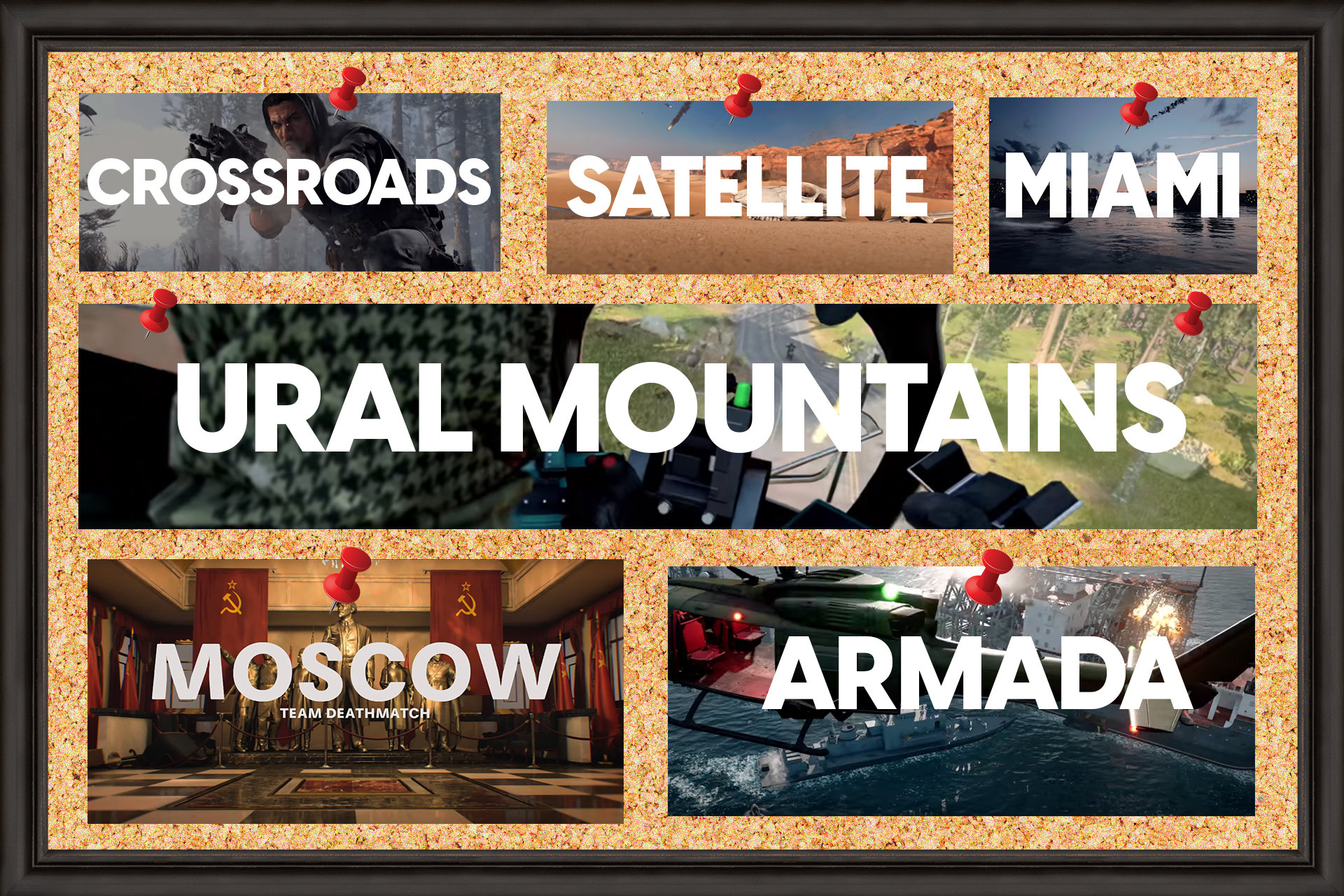 “Through hired DGI forces, Perseus ambushed and assaulted a prison transport in Miami’s famed South Beach in order to free a trusted ally. Amid the cover of night amongst vibrant art-deco architecture and neon lights, CIA special forces have been dispatched to eliminate remaining DGI forces and identify clues to Perseus’ whereabouts.”

“Deep in the deserts of Angola, Central Africa, a top-secret, American-made reconnaissance satellite known as the KH-9 has been grounded, potentially by Perseus. Hired DGI forces are searching for the sensitive intel it holds, while NATO’s MI6 Squadron have been dispatched to secure the site and eliminate DGI stragglers.”

“At a pivotal route to Afghanistan deep in Uzbekistan, NATO forces are mobilized to ambush a large Soviet military convoy comprised of mobile ICBM launchers. With the backdrop of a frozen Soviet Wilderness, an MI6 Squadron are ready to combat any Spetsnaz forces in order to secure the top-secret intel held on the convoy, as well as any necessary supplies for future operations. Use tanks to blow up enemy positions or snowmobiles to zip behind the enemy and break their lines.”

“Based on Operation Azorian, U.S. and Soviet forces arrive in the middle of the North Atlantic Ocean in search of a prototype nuclear submarine. The scale of the Cold War could be tipped in favor of whoever salvages it, whether it be the Soviets reclaiming it or the U.S. intercepting it. Zipline from ship to ship or command gunboats to turn the tide of the fight.”

”In the heart of the U.S.S.R, a Spetsnaz squad was sent to a compromised CIA safe house in order to secure the area, capture any remaining CIA operatives, and acquire further intel on NATO’s future plans. Initial reports indicate that the area has gone hot and fighting has spilled out into the streets, prompting a second CIA-JSOC team to arrive at the scene as reinforcements.”

Although we did not see anyone streaming it during the reveal, we do know that there will be a map located in the Ural Mountains, and another map that was previously leaked called “Tank”. Each map will also feature unique introduction cutscenes for both factions.

Black Ops Cold War has a plethora of new gameplay mechanics that will surely divide fans. Let’s take a look at some of those changes.

Starting off with the most divisive new feature, we have the return of scorestreaks. However, there’s a twist on Treyarch’s classic reward system. In Black Ops Cold War, you will keep your score upon death. Players who rack up a huge killstreak or scorestreak will get bonuses that will help them obtain other higher-end scorestreaks. This bonus is multiplicative with kills.

This has alienated some of the Call of Duty community already, with some gamers believing this will encourage more camping, slower-paced gameplay, and scorestreak spam. However, Treyarch has confirmed that scorestreaks will have a cooldown timer to prevent this spam. Xclusive Ace explained it best over on youtube. If you’re confused, give his video below a watch!

Another somewhat controversial creative choice lies within the game’s Create-A-Class and Gunsmith system. Instead of implementing their famous pick-10 system into Black Ops Cold War, Treyarch has decided to use a slot-based system that implements the Wildcard element of Pick 10 with the customization for weapons of Gunsmith! Each class will have a primary weapon, a secondary weapon, a piece of lethal equipment, a piece of tactical equipment, a field upgrade, and perks. Weapons have 8 attachment slots, which are comprised of:

On the surface, this does seem like a step backward for Treyarch. But, the studio plans to make each class unique through the return of Wildcards. Each Wildcard will heavily impact your class in a variety of ways. Here’s how each Wildcard works: 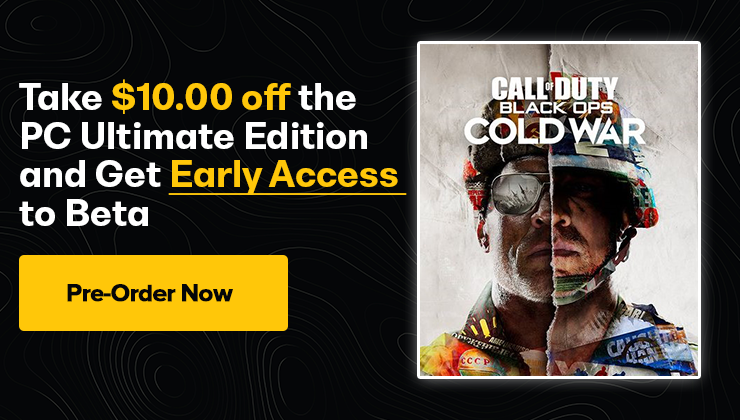 Moving onto the Gunsmith. Every primary weapon has 54 available attachments with at least 6 options per attachment. Without the Gunfighter Wildcard equipped, you’ll be able to outfit your weapon with 5 attachments. You can also see an exact percentage of the benefits and drawbacks of each attachment.

Finally, here’s a lightning round of other gameplay mechanics that were mentioned during the reveal and in a separate post from Treyarch:

Other Details From The Alpha

We know that classic game modes like Team Deathmatch, Kill Confirmed, Domination, and Search and Destroy are coming back for Black Ops Cold War. But, what’s new?

Deniable Operations is seemingly Black Ops Cold War’s most ambitious multiplayer mode. Taking place years after the end of the game’s campaign, you’ll select your operators and head out into battle across the large maps mentioned earlier in the article.

Admittedly, we don’t know too much about this game mode but Treyarch has shared that Deniable Operations is going to be included in the open beta for Black Ops Cold War (you can find more information about the beta dates later in the article).

Fireteam is a 40-player game mode that seems eerily similar to EA’s Battlefield. Here’s how Treyarch described it:

“10 teams of four face off against one another in large-scale maps featuring an assortment of vehicles to commandeer and objectives to complete as you best see fit. Fireteam is designed to allow for plenty of epic gameplay moments with big, unique environments for you to explore with your squad.”

Next up, we have VIP Escort. This 6v6 mode makes one player a VIP asset. If you are the VIP, you’ll be armed with only a pistol, smoke grenade, and a spy plane. As a teammate of the VIP, you’re tasked with escorting them out of the map. If you’re on the other team, your goal is to kill the VIP. Pretty straightforward.

Combined Arms is a 12v12 playlist spanning across multiple modes (including Domination). Players will use their skills on the ground and in a wide variety of vehicles to win.

Black Ops 4’s Control game mode and Hardpoint are making a return in Black Ops Cold War as well. And for the latter, it’s getting an upgrade. You can now see the next Hardpoint location via an in-game marker. Memorizing rotations is no longer required to be competitive.

The New Call of Duty Black Ops Cold War will support cross-platform, cross-progression, and cross-generation play. All of your progression will be tied to your Activision account, and you will be able to switch from platform to platform without losing any progression or cosmetics.

There has been rampant speculation on how Warzone will change going into the new Call of Duty title. Although the studio didn’t elaborate much, Treyarch has verified that Warzone will cross over between platforms and console generations. What exactly does this mean though?

First and foremost, as we understand it all of your blueprints and purchased cosmetics in Modern Warfare will transfer to the Black Ops Cold War version of Warzone. The map will be changed, but the game will still function the same in spirit.

It’s been reported that there will be more Warzone events for upcoming map changes by VGC in the past. Sadly, this was pushed back. The timetable is still unclear for when these changes will take place.

A nuke has been heavily referenced in both the ARG leading up to the initial campaign reveal of for the new Call of Duty and marketing material sent to COD partners which contained nuclear launch codes.

Just in case you all forgot, this massive Russian rocket is already on the #Warzone map in #ModernWarfare 👀

It’s currently “inaccessible” and locked behind bunker 10 at the southern edge of the map.

A website has also emerged containing Black Ops Cold War merchandise. A Cold War notebook listed for sale on the website contains the same nuclear launch codes that were sent to Call of Duty partners!

It is still unclear exactly how the transition will occur. What we do know is that Call of Duty: Warzone is a standalone title, and is independent of both Modern Warfare and the new Call of Duty. What isn’t clear is how they will integrate the two. Will we be able to launch Cold War’s Warzone from Modern Warfare? We will update you as soon as we know more!

Also, RIP Blackout. You walked so Warzone could run. 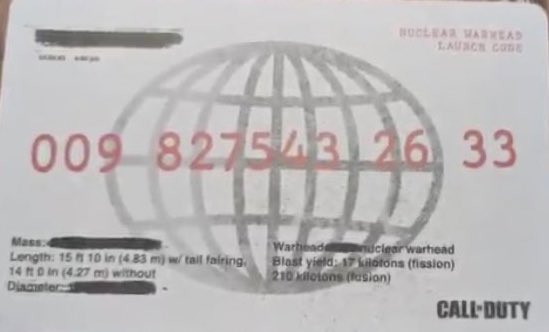 Next up, we have the highly-awaited return of Call of Duty Zombies. At the end of the reveal event, Treyarch unveiled a brief glimpse at their coveted mode. The teaser can be seen down below:

It wasn’t much but we did see the shocking return of Nacht Der Untoten (the first Call of Duty Zombies map EVER) and seemingly Tranzit (the starting map in Black Ops 2). The jingle for Juggernog can also be heard too. It’s safe to say that the old perk system is returning!

After the mixed reception to all the changes made in Black Ops 4 Zombies, including the removal of Juggernog, it appears that Treyarch is going back to what made the mode so beloved in the first place.

The beta times for Black Ops Cold War are as follows:

Safe to say, it’s a good time to be a PlayStation fan. Hopefully, there will come a day where exclusivity deals for video games don’t exist. But, for now, PlayStation users can rejoice. 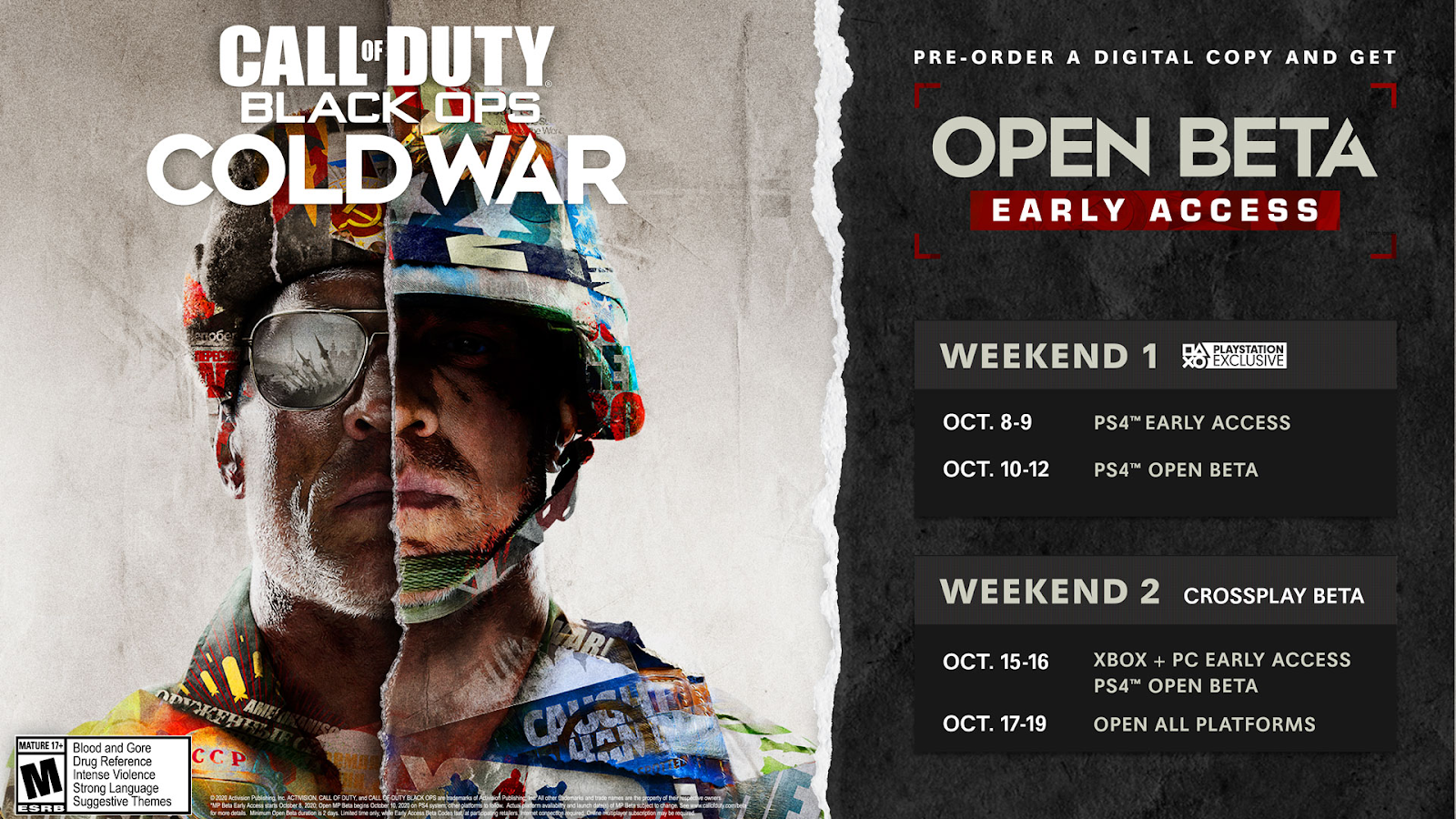 As previously reported by CharlieIntel, Black Ops Cold War will indeed be a Battle.net exclusive for PC. Furthermore, Treyarch confirmed that Beenox will be the lead developer behind the PC version of Black Ops Cold War.

There are a ton of new gameplay videos out there from Call of Duty content creators including Noahj456, NICKMERCS, Marksman, ShawnJGaming, KatContii, LEGIQN, Drift0r, Kat Gunn, BobbyPoffGaming, TimtheTatman, Trymacs, TeeP, Symfuhny, and more. So be sure to check out some of the gameplay for yourself!

And that concludes this hilariously long article detailing everything you need to know about the new Call of Duty Black Ops Cold War’s multiplayer. What are your thoughts on the reveal?

Was this a W for Call of Duty? Let us know in the comments below! And if you haven’t already, be sure to follow us over @ModernWarzone on Twitter for the latest Call of Duty news.

Also want to give a very special thanks to Taylor Cole for his assistance in co-writing this article! If you haven’t already check him out on twitter! He will be a huge part of ModernWarzone moving forward!