Black Ops Cold War Beta: Everything You Need To Know 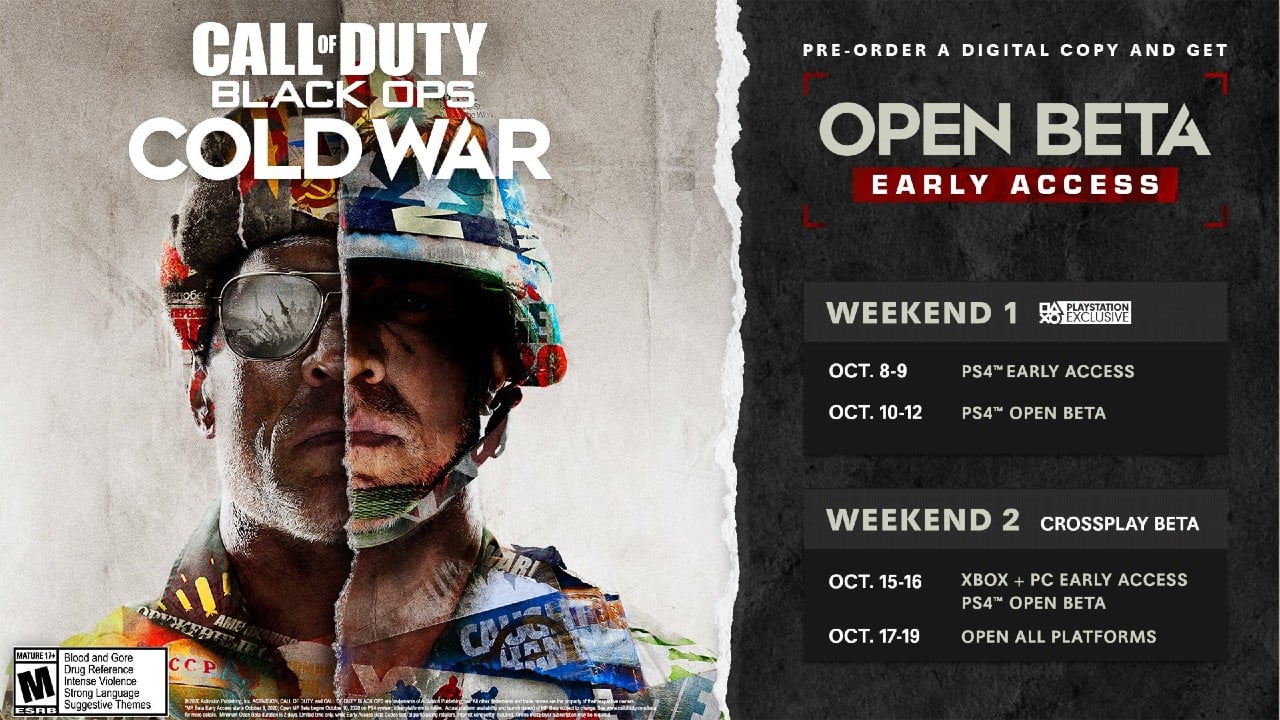 The Black Ops Cold War beta is now available to pre-load on PS4!

This beta’s launch schedule is a little strange. Those who digitally pre-ordered the game on PS4 will get their hands on the beta first on October 8th at 10:00 AM ET. You’ll be able to pretty much play all day Thursday and Friday.

Lock-in and load up.

Pre-load for the #BlackOpsColdWar Beta is now rolling out to those who pre-order on PS4. pic.twitter.com/anbX9chlbV

If you are one of those lucky people who are getting early access to the beta, all you have to do is search for it on the PS Store. You should have the option to pre-load the 31.775GB file. If you are getting a code from another source (like Xfinity), Activision should be sending out an email to you with a code attached. Lastly, Activision stated that if you download the beta on PS4 this weekend, you won’t need to redownload it next weekend when it opens up to every available platform.

On Saturday, the beta will open up to everyone on PS4 and it’ll run through Monday, October 12th. Those who play on Xbox One and PC will have to wait until the following week to start playing. Here’s the full schedule for the beta:

People on Xbox One and PC can pre-load the Black Ops Cold War beta on October 13th at 11:00 AM ET.

In the beta, players can expect to see some familiar and not so familiar game modes. Here are the playlists confirmed to be in the beta:

Although Activision has not released any information regarding the maps we’ll see in the beta, a recent rumor may be able to tell us more. According to Call of Duty dataminer BKTOOR, here is the list of maps that could be included in the beta:

Treyarch has confirmed that Cartel will be a new map added to the beta. Here’s how Treyarch describes the map:

“Set in the steamy jungles of Nicaragua, players will storm a remote cartel compound where a known Perseus associate has been operating in the shadows.”

“This lush map offers a variety of attack options for any play style, from the close-quarters interiors of the warehouse on one side to the shaded streams flanking the opposite end. If you’re feeling lucky, try holding down the central tower to snipe oncoming enemies, or take the stealth route through the foliage in the center lane.”

Creative Specialist at Treyarch Miles Leslie said that the team wanted Cartel to be a map where many different player styles could thrive:

“We built Cartel around the idea of an ‘open’ middle – one that provides a very high risk versus reward incentive. We wanted players to have the feeling that they could ‘own’ this part of the map by utilizing the plants, weaving between them, and really become a hunter. We definitely built in enough room for variety and different player styles to flourish.”

We’ll update this list of maps when we find out the rest of the confirmed maps for the Black Ops Cold War beta.

Activision has revealed the PC requirements for the beta. You can check that out by clicking here.

Level Up In The Beta And Receive New Rewards

There are special rewards for those who progress in the beta. Once you get to level 10 in the beta, you’ll receive an Epic SMG Weapon Blueprint when you boot up the full game in November. Playing the beta also gives you access to the Adler operator in Call of Duty: Mobile.

A recent Treyarch blog post has revealed some huge news for the Black Ops Cold War beta. For the first time in Black Ops history, you will be able to adjust your field of view (FOV) on ALL PLATFORMS.

Along with this, Treyarch revealed that you’ll be able to customize your HUD settings more in the beta. Here’s an excerpt from the post:

“It’s our goal to offer a wide range of heads-up display (HUD) element settings so you can customize your UI experience to what works best for you, even during the Beta. This includes the ability to toggle visuals for the compass, enemy and ally health bars, hit markers, crosshairs, player names, and button hints. In Black Ops Cold War, how much you see on your HUD is up to you.”

Last but definitely not least, the beta will include a ping system across every available game mode. Like the FOV bombshell, this is another first-time feature for Black Ops multiplayer.

For more Black Ops Cold War news, check our article covering Treyarch’s zombies reveal or our breakdown of what you can expect to see in multiplayer. Also, be sure to follow ModernWarzone on Twitter for the latest Call of Duty news.

If for some reason, you would like to hear more from me, check out some more of my other work here!